Stories in Retail: Mod Pizza to Open in Waxahachie, Texas

Stories in Retail – Mod Pizza to Open in Waxahachie, Texas

Waxahachie, Texas was founded in 1850 and became a pivotal agricultural, commercial, educational, retail and transportation center in North Texas. . Waxahachie is the county seat of Ellis County, Texas and is part of the Dallas–Fort Worth Metroplex.

Mod Pizza was founded in 2008 by husband and wife, Scott and Ally Svenson. They were inspired to start a new way of making pizza in their hometown of Seattle.

Waxahachie became the nation’s largest cotton-producing county during the early 1900s because of the prosperous cotton industry. As a result of this success, many cotton related industries, including one of the state’s first textile mills, were established in the town.

When the demand for cotton dramatically decreased during the Great Depression, the gins and textile mills were forced to close. After WWII, the town was ideally situated for the coming automobile age, due to its downtown location at the intersection of then U.S. 77 and U.S. 287. Over 100,000 vehicles travel through the intersection every day. Interstate 35 was constructed and Waxahachie continued to benefit from its proximity to these major roadways.

The town’s historical attractions include tours of many beautiful Victorian homes and the Ellis County Courthouse completed in 1895.

Today, Waxahachie hosts several festivals including the Crossroads of Texas Film and Music Festival in April, the Crape Myrtle Festival in July, and the World War II Reenactment in November celebrating Veterans’ Day. December’s offerings include the Parade of Lights, Candlelight Tour of Homes and Bethlehem Revisited.

Fort Worth Magazine published an article last year titled, “Discover Waxahachie’s Burgeoning Dining Scene.” The article mentioned the downtown area was filling up with “independent restaurants, owned by local families, upstarts and restaurateurs.” The website boasts “over 100 restaurants to choose from.”

Mod Pizza founders, Scott and Ally Svenson were searching for, what they call, “quick, affordable, wholesome restaurant options for their growing family.” They wanted a “super-fast” and different pizza place so they decided to start Mod Pizza.

Customers get exactly what they want, made fresh on demand, and it’s the same price no matter what you choose. Mod says their employees are paid above industry wages, given real opportunities for growth, and even second chances.

Mod Pizza reports it is about putting people first, striving to be a force for positive change in their lives and the communities they serve. With stores in over 28 states and in the United Kingdom, Forbes Magazine calls Mod Pizza one of the fastest-growing pizza chains in the country. 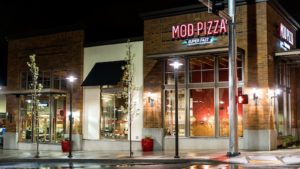 The Retail Coach is honored to play a part in the developing story of our client Waxahachie, TX and Mod Pizza. We build on relationships and celebrate the successes of our clients. The Retail Coach is a national retail recruitment and development firm that combines strategy, technology, and more than 35 years of creative retail expertise to develop and deliver high-impact retail recruitment and development plans to local governments, economic development organizations, and private developers.

The City of Waxahachie, Texas